Given the present rise of Islamophobia and the Trump Virus, it cannot be stressed enough that “we must never forget.”

I first read this book decades ago, when I was in high school, and I’ve never forgotten it. I’ve wanted to reread it but couldn’t find it in any library, and finally tracked down a used copy online.

It’s almost as stellar as I remember. I see now that it is somewhat contrived, to provide for the continual convergence of these two families, the Jewish Weisses and the party-line Dorfs, but it’s still quite readable and deeply moving. I was 16 when I first read it in 1978, before education about the Holocaust became common, and I was shocked to learn that it was based in fact and drew heavily from actual events, places, and people. A favorite teacher saw me reading it and introduced me to Anne Frank, Corrie Ten Boom, and Elie Wiesel. (That teacher so rocked. I already knew how to spell and write sentences correctly, and I used to sleep through her required English class until she started assigning me books and essays apart from the other students. I read and reported gladly and will always remember her as the epitome of what a teacher should be. I was horrified when she was brutally murdered a year after I graduated. RIP, Mrs. McGill – you live on.)

I am only now aware that Green wrote this story as a teleplay first and adapted it for the novel, garnering the Dag Hammarskjöld International Peace Prize for literature. I see the miniseries is available to watch on YouTube and I’m headed there next.

These past several months at work I was plagued by someone with no authority constantly telling me how to do my job. Once or twice a week, I’d get an email from this woman telling me that I hadn’t done such-and-such a thing. She is a private contractor, not an a fellow employee and certainly not my superior, with zero training in what my job duties are. Irritating as hell, oh yes. “Bite me” (or worse) I’d mutter every time I received one of those emails. Delete. Ignore.

This went on for months, and it grew. Her emails to me became more terse and condescending. Tired of it, I was figuring out ways to replace her with another contractor. Until I had a flash of inspiration, and checked something out. Turns out, she wasn’t being paid by my company in a timely manner. Payment for her services is not part of my job duties at all. But she thought the failure was connected to a function I routinely perform, assumed I must not be performing it correctly, and started trying to tell me what to do.

I did a little investigation, confirmed my diagnosis of the problem, and put her in touch with the office that handles private contractor reimbursement. Problems solved. She’s being paid as she should, and I don’t have someone trying to order me around.

Yes, she made incorrect assumptions, that her payment issues were my fault. But she’s not the only one. I incorrectly assumed that she was being an insufferable know-it-all. Both problems were compounded when neither of us communicated what our issues really were: “Gimme my money!” “You’re not the boss of me!” What it came down to was that each of was being threatened, and neither of us was responding appropriately, not solving and even escalating the situation. She could have lost a source of income, and I could have lost the services of a contractor who performs well.

Incorrect assumptions abound. Our only defenses are to think about what the problem really is, communicate what it is, discover the facts as we can, and do our best to find equitable solutions. When we don’t, we lose.

I am reminded of this in the wake of the ISIS attacks on Paris and the flood of pro- and anti-refugee and pro- and anti-Muslim sentiments everywhere. 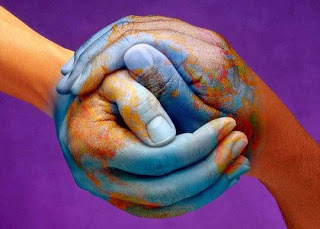 No, I’m not going to talk (much) about the issues of refugees or Islam, per se. But oh my, the fur is flying, along with insults and xenophobic propaganda on a level with that perpetrated against the Jews by Nazi Germany. Social media have become cesspools. You’re a racist hate-mongerer. Yeah? Well, you’re a bleeding-heart terrorist-lover. It sucker-punched me, though, when I saw ugliness being posted by people I thought I knew, people I hold in high regard, people I love. People that I believed thought like I did. I was surprised at how much it upset me, as if what’s going on in the world wasn’t upsetting enough. I’ve unfollowed a few people, and a few have probably unfollowed me. They’re probably as disappointed in me as I am in them.

And what’s being solved? Nothing.

I took my upset to a group of bloggers I am privileged to know, souls more contemplative and level-headed than I. I listened to their words, and read their words. I stepped back from the shitstorm and allowed things to just percolate in my mind and my heart, and I was able to gain some perspective.

And I remembered the non-boss trying to boss me around. What had I learned?

When we operate in the face of threat, we don’t think clearly. Yes, people reacting from a position of xenophobia and hatred are operating from fear, but so am I. I am also afraid of more violence being perpetuated against my own country, whether from terrorists disguised as refugees, or from terrorists already hiding here, or from someone out there somewhere else who decides to fly another plane into another skyscraper, decides to detonate another explosive-laden Ryder truck by an office building. But I am also afraid of what will happen to us as a race if we don’t do the right thing and help our fellow humans when they need it. I am afraid of how horribly divided this country is becoming on issues that are central to our collective identity. That, I think, is the biggest victory the terror machine can have, when they drive a spike into the collective soul of America, turning us against each other and getting us to do their work for them.

I am reminded most of all that the world is hurting, and all of this conflict, words and bombs, is symptomatic of massive change and healing that are essential if we are to survive and evolve, as individuals and as a species.

That won’t start until we start having real dialogue, using facts and reason instead of generalization and speculation and outright lies. When I allow you to be the boss, and you allow me to be the boss, we work together. When we work together, we stop yelling at each other and start listening. Listen to the fear, the worry, the pain, and treat them the only way they can be treated – with compassion, love, healing.