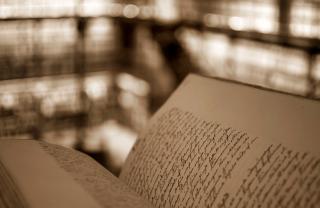 Because everyone has a story to tell.

Because busy people accomplish more. If you already work, care for a family, keep a home and have a social life, why then, if you decide to write a novel, you just might clean out your garage too.
NaNoWriMo is a month of delicious artistic lunacy. NaNoWriMo is all about opening up creative gates, knocking down barriers, not just listening to the Muse but buying it drinks and taking it home and sleeping with it and cooking it breakfast in the morning. It’s about getting that crappy first draft written so you actually have something to bitch about editing later on. NaNoWriMo is all about getting the dross on paper so we can pan for the gold nuggets later.

If you’re not familiar with National Novel Writing Month, it’s gloriously simple. Many of us who set out to write novels get bogged down by the enormity of the task, pulled under by our need to make it perfect, and give up in frustration after Chapter 4. NaNoWriMo requires an entire first draft of a complete story with a minimum of 50,000 words in 30 days. The idea is “don’t get it right, get it written.”* You won’t have anything to edit and polish later if you don’t let yourself plow ahead and make mistakes and write schlock right now, because that’s what most first drafts are–schlock.

November is coming. WriMos are gearing up. We’re outlining plots and subplots, we’re sketching scenes, we’re developing characters from their underwear to their horoscopes, preparing to plunge into novel-writing madness for 30 days and nights. Or, some of us are doing that. Some of us dive in headfirst with no preparation beyond stocking up on coffee and junk food. Whatever works.
NaNoWriMo is about letting yourself get into that zone where words bypass your thought process, rising up from some unknown secret wellspring deep inside your psyche and flowing through you like molten gold, out though your fingertips and onto the keyboard while magically bypassing all the self-defeating noise your Inner Editor* spews to make you think it will never do anything but suck, and just writing for the sheer joy of writing.
But when you’re in the middle of it, NaNoWriMo is mostly about word count. Those of us who participate in this annual insanity are mainly after one thing: to cross that mythical finish line, getting that quota of 1,667 words every day for 30 days straight to add up to the magical 50,000 words that makes us NaNoWriMo winners.

So of course it’s about words because it’s about writing, but it’s about numbers too. Yes, I want what I write to have some element of quality, but the way I win is by getting my word count goal for the day, every day. Some days, it’s tough. I have a few tricks that I’m happy to share. You’re welcome.

1.  Have a deaf character. When everybody has to say things two and three times, you get that many more words. It can also be hilarious.
2. I’m not one for long flowery descriptions of the scenery. When I come across them in books I tend to blip over them. But I’m not above resorting to this when it’s the only way to reach my daily word count, and I’m told it’s good practice. For what, I don’t know.
3. Give people double names. Elizabeth becomes Betty Jean. Robert is Bobby Joe. You can always search and replace it later if your novel doesn’t happen to be set in Arkansas. You can also give them titles and use those titles every time you reference the character. Betty Jean Smith, Grand Exalted Poobah-ess of the Majestic Arctic Wasteland has 11 words to Elizabeth’s one.
4. Keep calm and kill the character. In the world of your novel, you are God. Smite ’em down. One little death gives you a wealth of subplots, zinging out in all directions. Check A Game of Thrones. If Martin hadn’t killed off Ned Stark, there would have been no story. As much as we all loved Ned, we must remember that he died nobly for the greater good.
5. Bring in a new character. Maybe your heroine is riding the bus when it brakes suddenly and she lands in some guy’s lap. Maybe your hero answers the door to find the child he never knew he had standing on the porch. Run with it. You get lots of mileage and you could have a new big player.
6. Follow the Plot Bunnies.* You know, those weird floppy-eared creatures that hop into your scene from nowhere and hijack it. You’re laboring along, painstakingly carving out mother-and-daughter literary angst over oolong, when a cockroach comes out from behind the breadbox in broad daylight and starts talking. Let it talk. See where it goes. Follow along. Sure, you’ll probably edit it out later, but it might be good enough to paste right into a whole new work.
7. Dream sequences. Yes, I know, dream sequences are cheesy as hell, but they can be germane to the plot if they’re recurring or prophetic.
8. A great suggestion from Chris Baty, author of No Plot? No Problem! is to avoid contractions. Makes sense. A contraction is one word, not using it is two. When you are desperate, you are desperate. This doesn’t always work well for me because it doesn’t flow with my style, but I keep it in my ammo belt.
9. Have your character find a diary, receive a letter, or read a newspaper article. Any one of those can be good for a couple hundred words, and it can jump-start a stalled story line.
10. Title your chapters. “Chapter One” is two words you didn’t have before. Or get Dickensian with it: “Oliver Becomes Better Acquainted With the Characters of His New Associates; and Purchases Experience at a High Price, Being a Short, but Very Important Chapter, in This History”** is a chapter title to die for at 28 words. You can also do chapter leaders, where you quote a poem or song lyrics or book passage at the beginning. Bonus: finding those quotes is a great procrastination technique.
Speaking of titles, I have fun playing with this random title generator. Here’s another one. Occasionally they give you something useful. I like to play a game where I have to make today’s chapter fit both the randomly generated title and the novel I’m actually writing.
Any other WriMos out there? What are your word count padding tricks?
*Thank you, Chris Baty, NaNo guru. Yes, I endorse this book.
**Thank you, Oliver Twist.
Photos, in order of appearance:
Book: Mikko Luntiala, Flickr Creative Commons
NaNoWriMo winner badge: Mine. I don’t know who created it, but I won it and it’s mine.
Two-Buck Chuck: Mack Male, used under  Creative Commons Attribution-Share Alike 2.0 Generic License.