A man stepped on to the already crowded elevator car, smiling and apologizing as everyone squeezed together to make room.  Then he addressed me directly: “Oh, thank you for that. You were the only one who smiled.” Another woman immediately took him to task, defending people here in the commerce district who are too busy and stressed, trying to keep their jobs in these tough times. Ain’t nobody got time for that smiling shit.

Not in Seattle, anyway.

Still quite pleasant, the man said,  “Oh, I don’t know. I work two jobs and I can still smile. I just moved here and I’ve never seen such a place where people won’t smile at you.”

This really got the woman defensive. No doubt she’s heard this particular complaint before, and doesn’t like her city dissed.

“I moved here three years ago and I know what you mean,“ I said to him, when she paused for breath.

“Rude,” he mouthed at me, still smiling. I nodded, smiled back. The woman went right on lecturing, making his point for him. “Good luck to you, and keep smiling,“ I said as I left the elevator.

Here’s what I would have told him if we hadn’t been smooshed into an enclosed space with a whole bunch of (most likely) Seattleites: It’s called the Seattle Freeze, and it’s a real thing.  A counselor I was seeing told me about it. How nice to learn I wasn’t crazy – at least, not about that.

It’s true. Walk down the street in Seattle, smile at people. They’ll look affronted, or like you’re crazy, maybe even walk a little wider as they pass you. If they do smile back, there’s a grudging air about it, like “Oh, all right.” There’s a woman who has waited at my Metro stop every single morning for the last six months. Daily contact, same time, same place, we live in the same damned building. Once or twice I’ve smiled at her. She just looks back down at her phone. One time I ventured to say, “Good morning.” That at least got her expression to change. Her eyes widened. Then she looked back down at her phone without a word. I haven’t spoken in her presence since. Whew. Glad that tension’s gone.

It’s not that the people are complete assholes. If a woman slips on the ice they’ll help her up, help her to a seat, get her a cup of coffee (this is Seattle; you can’t throw a stick without hitting a coffee house). They’ll stop and give a dollar to the homeless guy on the corner and maybe buy him a cup of coffee (see previous statement about stick-throwing). If you’re running to make the bus, other passengers will get the driver’s attention to wait for you. They won’t speak or smile once you’re on, but they’ll help hold the bus. It’s the weirdest damned thing.

All this time I can’t help thinking there’s such a thing as manners. Perhaps not on the street, no, I guess I can see that, but surely in an office? For a while I worked at a law firm that shared space with two other firms. As I saw people in the community mail/copy or break rooms, I would greet them. It’s what people do, right?

Not in Seattle. I figured I was imagining the repeated looks I got in return, like I was a cockroach in the coffee pot. Then I was informed by my boss that there had been complaints that I was too personal. Seriously? Well, all right then. No, I don’t wish anybody a good morning after all. I take it back. So sorry.

That’s when my shrink lady told me about the Seattle Freeze. I’ve heard it attributed to the high Nordic strain in the people here, an aloofness that comes from natives of the Great White North. I’ve heard it’s a throwback to the pioneer spirit. Pioneer spirit, my left ass cheek; this entire country was populated by pioneers. I’ve heard it blamed on the high ratio of nerdy, introverted tech people, and on the depressing weather, and because Seattle natives already have friends. Well, yes, but people everywhere already have friends, but they’ll be pleasant, even welcoming, other places I’ve been.

No, I maintained. Seattle doesn’t exist in a bubble. People here have had enough exposure to the rest of the world to learn some friggin’ manners. When you’re in a shared space and someone greets you pleasantly, looking down your nose like the Dowager Countess when a village peasant dares to speak to you — that’s just plain rude.

But, on the other hand. There’s always that other hand. That’s why we have two of them. I grew up in a small ranching and farming community in the high desert of northern Nevada. People would come to visit and ask if we actually knew all these people we passed while out driving. Nope, we’d answer. “You wave at people you don’t know?” Yep. People wave there. They just do, whether they know you or not. They’ll even wave if your license plate is from out of state; hell, they might wave harder. It’s just how it’s done there.

Almost thirty years ago now, about an hour after my father passed away, I went to gas up my Jeep preparatory to anything I might need to handle. The man taking my money to start the pump pulled what men have probably been pulling on women since language was invented: “Why don’t you smile, honey?”

“My dad died,” I replied shortly.

He looked stunned, then abashed, then apologized for being an insensitive jerk. He should have. It’s none of his business whether I smile or not, and it shouldn’t take a gaffe like that for him to realize it. My face was not created to please him and is mine to do with as I wish. Exchanging pleasantries brightens our days, but no, it’s not mandatory. Nobody has the right to demand that anyone else smile, especially when it’s a thinly-veneered come-on. (And “my dad died” is the answer I now give to any man who tries that crap on me. I’m not lying when I say it. He did die. Not an hour ago, but he died. Shuts ’em right up.)

So, I have to be fair about it. If it’s none of anybody else’s business whether I smile, then it’s none of mine if anyone else does. Whether it’s because they have a migraine or because they’re a Seattle native, it’s their right to not smile or return greetings. It does make it pretty much impossible to make friends, but how handy I’m so highly introverted as to be abnormal. And since I’ve been here, I’ve never once been taken to task for my Resting Bitch Face.

As I said, it’s none of anybody else’s business if I smile. I may have a terminal case of RBF, but I do also make an effort to be cheerful with the people I see every day, as we share commutes and living and working space. Sometimes I want to be cheerful for me.

Good sodding morning to you, Seattle. And I’m going to smile when I say it, whether you like it or not.

The Tominator and Dream Girl and I crossed Lake Washington to Bellevue to catch the Snowflake Lane celebration. I’ve heard people say it’s the best in the country, and I can see why.

The streets and the performers are dressed to the nines. Happy holiday music plays and live toy soldiers keep the beat. 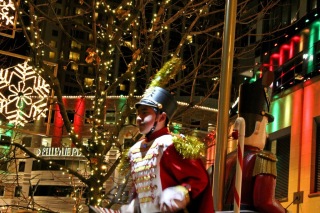 The Wintergarden has a huge, breathtaking tree.

At 7 p.m., more soldiers block the street off to make way for the Jingle Belles dancers. It’s infectious; the crowd is dancing and laughing while snowflakes glow and the snow machine fills the air. One of the things we learned is to get there early so you can get a good spot; otherwise it’s as futile as watching a parade when you’re short. Sorry; no pictures of the dancers.

We also learned that eating is a good thing to do early. When we were there, the wait was two hours at each of the restaurants we checked. You won’t go hungry, though; there are street vendors and walking a few blocks we found Subway, pizza and noodle places, a Thai restaurant.
The show is free, and so is parking in three different garages just for the occasion. Dress warmly. Baby, it’s cold outside. Afterward we warmed up with peppermint coffee and hot chocolate and freshly baked pie. 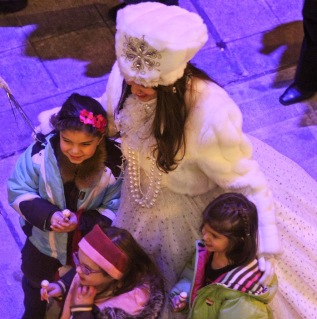 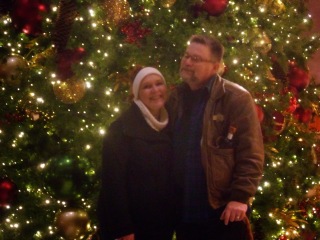 ***
Photo credit:
The Tominator, Dream Girl and I are my pics.
All others appear courtesy of Kathleen Leavitt Cragun, used under Creative Commons license.