Skip to content
Honesty in compassion.
Ah, yes.
‘Tis the season. Not the Christmas/Hanukkah/Kwanzaa/Winter Solstice/Happy-25th-of-December season, but election season. Opinions abound. Unfortunately, so do opinions disguised as fact, usually in spam emails and memes all over Facebook. All the more reason to stay off Facebook.
Even more than usual, with things picking up speed in the political arena, disinformation abounds in the cybersphere. Facts and statistics are twisted, if not made up from whole cloth, and spread around as solid information, all in the hopes of influencing our opinions on everything from abortion to immigration to education to health care to foreign policy to wealth disparity to gun control…you name it. Flaming articles and skewed perceptions and outright lies are floating around about Democrats and Republicans, about conservatives and liberals.
Ah, crap.
We cannot decide where our compassion must fall and where our compassion is best applied if we cannot take the time for honesty, not only in telling the truth but in discerning the truth. With so many hot-button issues that many of us feel strongly about, it is more important than ever that we think before we feel.
CRAP. I’m talking about CRAP, the acronym, used to evaluate information as part of the critical thinking process. You know, critical thinking, where we listen to what’s said and then we listen to the other side, and then we do a little bit of research and make a rational, well-informed decision based on facts and evidence and our own personal ethics and beliefs, rather than on other people’s rabidity and hysteria and fear. Where we use our brains instead of letting others play on our emotions. Critical thinking.
C.R.A.P, for currency, reliability, authority, and purpose.

C is for Currency. How fresh is it? A couple of weeks ago I saw a meme circulating about the death of Ernest Borgnine. It’s true, he did die. Three years ago. Sad, yes. Current, no. Make sure the information you’re being given is up-to-date before you react to it.

R is for Reliability. Is it opinion, or fact? What is the source of the purported facts? Is it a religious belief, or is there solid physical evidence? Are references cited? Are there sources for quotes? Fact-check things. Google is your friend. Find out who really said it, and in what context.
That “Life should not be a journey to the grave…* quote, the one we see attributed to everybody from Ian McKellen to Keith Richards? No. It was Hunter S.Thompson who wrote that, in The Proud Highway: Saga of a Desperate Southern Gentleman, published 1997. Keith in particular certainly embodies the sentiment, and Ian and Keith both rock, but neither of them originally said it. It took me less than 5 minutes to find that out.
A is for Authority. Who is giving you the information? What are his or her credentials? Are there any affiliated institutions, and how credible are they? Who is publishing the information? A news source already known for a particular slant is not going to give you information that doesn’t already agree with it. An educational journal or a non-profit independent research institution is a good source, but look further. Does the publication or channel have religious or political affiliations, or does it assume a neutral position? Who paid for a study can have a lot to do with the results. An example is Big Tobacco funding studies to “prove” cigarettes aren’t that bad for you. It took me less than 5 minutes to find that, too.
It’s easy to check on political and legislative records. On a national level, the Open Congress website lists all bills and what they propose, as well as how everybody voted on them. Again, less than 5 minutes. Go to your state legislature’s website for similar info for your state. Completely unbiased, unlike somebody’s dumb meme. A hash tag is not an authority.
P is for Purpose. Are you getting straight-up, just-the-facts reporting? Or is someone trying to convince you of something, to sway your opinion, to win your vote? Are they trying to sell you something? These aren’t automatically bad. It’s the nature of political campaigning to try to win votes; it’s the nature of capitalism to try to make sales. But there is always a high potential for conflict when money is in the background. Does the website hosting the article you’re reading have ads? Who are the sponsors? If they persuade you, what’s in it for them? What’s in it for you? Do they get money or power and you get nothing, or do you have compatible goals?
This is particularly important when it comes to political candidates – where is their money coming from? If a politician’s promise to you conflicts with the source of the bankroll, don’t for one minute be naive enough to think they’ll choose you. Cynic that I am, I firmly believe a politician’s influence will go right back to where the money comes from. It’s why candidates are legally required to disclose where their campaign donations come from.  Make use of that information.
The power of CRAP. It all comes down to deciding whether you want to hear the truth that may make you uncomfortable, or if you just want to hear what you want to hear, that fits neatly into the worldview you already have. Honesty requires shaking things up from time to time, including our own viewpoints. That’s how change happens. Nobody ever made the world a better place by being complacent or blindly swallowing what somebody else was holding out on the spoon.

Of course we are all entitled to our opinions (although I will never understand how anyone can support a Presidential candidate like…never mind, this is not the place), but we owe it to ourselves and to the world around us to make informed decisions. Please, for the love of all that is holy and intelligent, don’t decide who you’re voting for based on some stupid meme or spam email or TV talking head or politically- or religiously- inclined news source or God-knows-what idiot, using information from God-knows-where. Listen to what the candidate has to say. Check official voting records. Read press releases. Attend rallies. Fact-check, fact-check, fact-check. Don’t assume anyone else is doing that for you.

And remember,  I am also God-knows-what idiot out there. You got your information  from some blog? Not a scholar? Not a Pew study? Not the New England Journal of Medicine? Some malcontent at 99 Monkeys said it? Puh-leeze.
In other words, you may safely assume everything I’ve written here is bullshit. 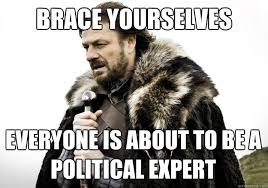 You can trust Ned Stark, though. He is absolutely telling the truth right there.
* The entire thing:  “Life should not be a journey to the grave with the intention of arriving safely in a pretty and well preserved body, but rather to skid in broadside in a cloud of smoke, thoroughly used up, totally worn out, and loudly proclaiming ‘Wow! What a Ride!'” ~ Hunter S. Thompson, Gonzo journalist extraordinaire