Jane Doe is on my mind a lot lately. It’s her fault I can’t sleep tonight. So, I sip at a mug of chamomile tea and write a bit about Jane Doe.

If you read this blog regularly, you’ve come to recognize Jane as a fictional character I write about in flash fiction. Her stories can be found under the “Flash Fiction” tab above, or click here.

Jane started her life as the protagonist in my 2015 NaNoWriMo novel. I won NaNo by completing a full draft of a novel consisting of at least 50,000 words (I finished with 73,270) in 30 days. She was born there, but she hasn’t taken shape or come into her own yet. That’s rewriting and editing to be done, a lot of it. I love NaNoWriMo. I’ve participated every year since 2008. It’s crazy creative fun and a wonderful way to choke a story out, to by-god get that first draft written so you have something to bitch about having to rewrite and edit, and it’s expected to be shit, because as Papa Hemingway said, the first draft of anything is shit. So, I love NaNoWriMo. But the drawback to NaNoWriMo is that with a crunch of a deadline like that, you’re not going to get a lot done in the way of character development, or logical story arcs, or well-crafted settings, or subplots, or any of that novel-y stuff.

Enter flash fiction. I stumbled across the weekly flash fiction challenges held over at Carrot Ranch Communications, and not only am I enjoying participating with other writers and having a ball with flash fiction in general, but I’ve been using it for little Jane Doe vignettes, and Jane is fleshing out far more than she did on the pages of that draft novel. I might be on to something here.

The defining thing about Jane is her homelessness, and that’s why I named her Jane Doe. That’s who she is to the majority of the people who pass her on the street: a hapless unknown, a lazy good-for-nothing, a nameless, voiceless nobody. I want to give her a voice and make her a somebody, help the world see that she is a real person, with fledgling dreams and broken dreams, loves and losses, starts and stops and failures, and she’s still out there trying, and surviving. Barely surviving. 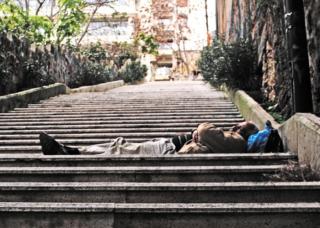 Another defining thing about Jane Doe is that she is Anywoman, she is Everywoman. Any one of us could be Jane. I was hit by the bad economy in 2012-2013, when I lost my job in Nevada, moved to Washington because that was the only place that extended an offer of employment, and immediately lost two more jobs once I got here. I’d intended to keep my Nevada home as a rental and sell it when the market recovered, but I couldn’t hang on, and I lost it. If I hadn’t had a 401(k) to cash out, I don’t know what we would have lived on. Poof, home and retirement, gone.

(That could be my own fault, because I was unable to figure out how all these lazy unemployed people are riding high on unemployment benefits. My benefits were good for less than a year and didn’t even cover groceries for a month, let alone rent and all those luxuries like electricity and prescriptions and gas for the car and tampons and a phone and an Internet connection so I could look for another job, and if you think this paragraph is two barrels of snark aimed at unemployment haters, you’re absolutely right.)

I’m not bitching, not really. I’ve lost what I had invested and put by, but I did find another job and I’m still here. The Tominator and Dream Girl and I have a roof over our heads and food on the table. But it’s scary. I’ve heard it said a lot lately that most of us are one paycheck away from being unable to pay for that roof, and I’ve been close enough to believe it. I didn’t end up homeless, but the thought of it haunts me. I lost more than my house and my retirement. I lost security in my own capabilities and worth, my sense of my place in this world, my faith that I’ll always be able to take care of myself. Because for every one like me who had resources to fall back on and was able to find another job, there are thousands who didn’t, and couldn’t. How easily that could have been me. How easily it could still be me, at any time.

One of the things I did in response to my economic crisis was go back to school. Part of it was bucket list, part of it was a genuine desire to prepare myself for a new career, to make myself more marketable generally. But all the rah-rah you hear about a college degree guaranteeing you a good living is just that: rah-rah. I have a good friend who is highly educated, highly intelligent, highly capable, a powerhouse of get-things-done-genius, with a killer resume – who has been in various stages of unemployment for more than eight years. He would be homeless and without all his possessions, right now, if not for the kindness of his friends. And it’s not laziness. He estimates he’s applied for half a million jobs in all this time, and he has worked, happily, whenever someone invited him to, even temporarily. Overqualified? He doesn’t care. He’ll take it, and be grateful, and he’ll stay with you just to prove his gratitude. Unemployed too long? That’s bullshit. Those are the people who should be getting preferential treatment, if you ask me.

I did a bit of research about college degrees among the homeless but I didn’t find much. I found this story on Huffington Post about homeless college students, and this story about a well-educated and highly qualified man who is homeless, and this blog about being a homeless college grad. Nothing’s been written on the blog for a while, and I hope it’s because she found a job and was able to move in with her boyfriend and is now insanely busy and happy with her new career and their life together. I really hope that. But I would be interested to know how many of our homeless population are college-educated professionals who hit the wrong luck on the wrong day and don’t have anyone in their lives who will help them.

One of the things I’ve learned from my own experience is that once you start to slide down this slippery slope, you’ve been marked. One woman wrote to me that after a brief stint of homelessness followed by the blessing of a home, she is still afraid. My good friend lives in fear now, and may always be even if he wins the lottery and buys his own island. I didn’t end up homeless, but my experience with jobs disappearing from under my feet and being just that close to not being able to pay the rent have left me frightened as well. I have a job now, I’ve had it for more than two years, but it still keeps me awake at night, how easily a secure life can turn upside down. This is not imagination; it is a real phenomenon. It hurts us, and it leaves scars. I’d read The Grapes of Wrath again if I wasn’t sure it would only leave me teary and depressed.

Getting back to Jane Doe, I’m starting to think that her story can best be told through a series of interconnected short stories, rather than a longer novel. Her desperation calls to me, creeping in and making its presence known in different ways and at different times and in different places. Jane’s resilience and determination define her as much as her homelessness does. The twin antagonists of her stories are fear and shame.

Your world is scary, Jane Doe, and I do want you to tell me all about it, so I can tell it to others.

But for now, please, let me sleep.