Skip to content
Is the world still here?
The night has turned inside out.
I am just a ghost.

The best way to talk about anxiety and panic disorder is in the context of experiencing a perfect day without them. In the 35 years since I had my first panic attack, these days are rare. I treasure them.
My son Monster was here this past week. Since I moved from Nevada to Washington, he’s what I miss the most. Several months ago he texted me that one of his favorite musicians, Steven Wilson, would be appearing live in Seattle in June. I got the show tickets and he got a plane ticket.

Life is full of blessings when we open our eyes and hearts to appreciate them, but every now and then, a perfect day stands out above all the others, one of those days that when you’re living it, you find yourself thinking, “I could die right now and not mind at all, because I’ve had this day.” That perfect. I love it when I have the presence of mind to know how perfect things are, without having to look back later in belated realization.
Even though I spent part of the day working, that perfect.
I left work and met Monster downtown, surrounded by strangers, the stuff of which agoraphobic panic attacks are made. Attacks completely absent. We walked around Pike Place Market, looked at souvenirs and jewelry and leatherwork and flowers and gewgaws. We listened to the buskers and ate locally packed huckleberry ice cream. At peace, relaxed. We got hungry, ambled over to Kells in Post Alley. Eating in public, a bugaboo for me. Panic and anxiety absent. We laughed over Irish red ale and I rediscovered Irish soda bread. We were mildly disappointed that the ghost for which Kells is known did not make an appearance. No panic.
You would understand how much this meant if you knew how rare these days are for me.
And then…and then…he got me to go on the Great Wheel, Seattle’s 175-foot high Ferris wheel on the waterfront, extending out over the waters of Elliott Bay. Sure, it took a little bit more alcohol… 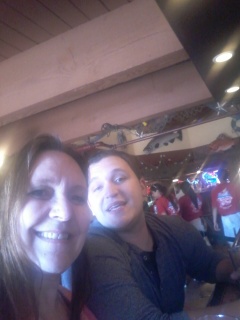 …but a cold Alaskan Amber ale is not such a sacrifice on a beautifully hot day on the Puget Sound.
I was calm while we bought the tickets and stood in line. I was calm as we mounted the steps and stepped inside the closed-in Ferris wheel car. I felt calm as the door was sealed shut and we moved up just a little. I marveled a bit at it, that calm.
We moved farther up and then stopped so cars beneath us could be emptied and filled. We were high up now, the city like a toy beneath us. We were locked in a clear bubble suspended from a metal arm. Precarious! My throat seemed to fill and I felt that twinge, that small stab in my gut, the beginning of my panic but then, wonderfully, some hidden Oh-No-You’re-Not-Ruining-This-Good-Time-With-Your-Stupid-Anxiety-Bullshit part of my mind immediately quelled it. (Note to self: strengthen the ONYNRGTWYSAB brain part. It kicks panic attack ass.)
I did not panic. I took pictures, as proof of my accomplishment. I was on a giant Ferris wheel! 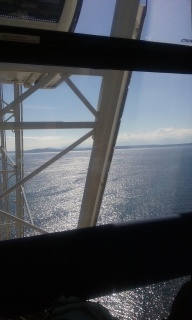 I was laughing when we got off again. No panic! No anxiety! No cowering in the corner praying for five whole minutes to go by so I could get off that contraption! But I hadn’t only survived it — I’d enjoyed it!
Almost time for the show, we made our way back up from the waterfront to the historic Moore Theatre, built in 1907, a beautiful building. The line at the door was already around the corner as we joined the end of it. Again, open street, lots of people…still no anxiety. We waited in line for an hour, leaning against the building, sitting right on the sidewalk, people-watching, remembering other shows. No anxiety. The line started to move. Thousands of people milling around inside, but no panic there either. We found what turned out to be excellent seats, and settled in for what turned out to be a decidedly excellent show.

A brief digression, but maybe not so much, because it all ties in for me…one of the inspirations and themes behind Steven Wilson’s latest album, Hand. Cannot. Erase., is the story of Joyce Carol Vincent, the young British woman who had been dead in her flat for three years without any of her numerous friends and family members noticing her absence, her body not found until creditors broke her door in because she was behind on her rent. But it is not just the tragedy of failed connections, but also a celebration of connections that we were made at all, and the knowledge that once we have a moment of joy, that connection can never be lost. That’s just what I think at this point, having listened to it only a dozen times or so. I’m sure there’s more there. If you like art rock and a deeper meaning to the music, go buy this album. Now. It is phenomenal.
And still no panic. It helped that the crowd was largely mature and not so inclined to unruly displays, and that Wilson himself is not a rock star so much as he is a true performing artist, not on stage to posture or whip up a frenzied mob but rather to bring a message through the mediums of exquisitely instrumented sound, simple yet eloquent visual effects, and, more than anything else, ambiance. (I am also partial to the fact that with his hair and glasses he’s got this whole John Lennon thing going on.) At different points people stood up to rock out, at other times they stayed seated. I sat anyway, feet and arthritic knees aching, surrounded by torsos and arms and glowing blue dark, feeling the bass thumping in my chest, closing my eyes to let the music wash over me and pull me under.
Heaven.
No panic at all. Not even on the way home, bus so crowded we had to stand, mild altercation with the self-absorbed jerk who damn near pulled me to the floor as he bulldozed through. The day had been full of too many happy things.
These are the days that make my life shine, a life marked indelibly by 35 years worth of anxiety disorder and panic attacks that could easily have rendered me housebound if I wasn’t so stupid, or stubborn, or both. These are days when I know I am not defeated; that I think that if its only purpose is helping me appreciate all the shining things, then that is a worthy purpose; that it is always worth getting up one more morning in the hopes that this day will be another one of those days that shines a light when my  mind is overtaken by black. I may cover my eyes with my hands in the desolation of depression and panic, but there are things I will always be able to see, no matter how far away they are in time and in space and no matter how tightly I close my fingers.
Because the bad things do not ruin a life. A connection lost in real time doesn’t mean it’s still not there somewhere. That’s the wonder of memory – time is a like a river. We can walk back upstream and step into a shining day from childhood; we can walk downstream and wade into anticipation and dreams for the future.
https://www.youtube.com/embed/PyelZ_KeUik?feature=player_embedded